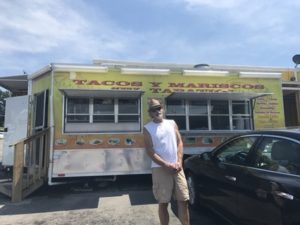 The fourth edition of Tommy’s Tracks Taco Tuesdays brought us to El Tapatio at the bottom of Nolensville and Northcrest.

First impressions: El Tapatio operates not only as a taco truck, but also as a full service dining experience. So whether you’re looking for a quick taco or a full meal, El Tapatio is the place to be!

El Tapatio was one of the locations we were most excited about visiting; it’s definitely hard NOT to be excited when there is a smoker billowing delicious smells into the street every day. There was parking available, but was definitely limited. We walked up to the truck and was greeted by a server who offered indoor seating. We gladly took a table and scoped out the surroundings.

This was the first location we went to that had a full service restaurant. The dining room was half full of patrons on their lunch breaks sitting in booths watching the telenovela on the TV. This was also the first location that offered beer! We definitely enjoyed having access to a comfy place to sit in the A/C and eat our tasty tacos. 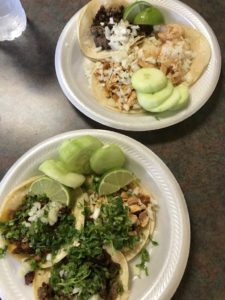 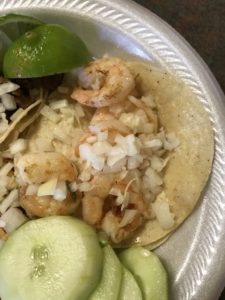 We have a shrimp taco, ladies and gentlemen! This was the first location we visited that featured a shrimp taco on the menu, so of course we had to try it out. The juicy, tender shrimp shared space in the corn tortilla with rice, which we were not expecting. Though it seemed a little strange to throw some rice in a taco, it was honestly just another texture and flavor that made the taco such an unexpected treat! The shrimp taco is usually topped with cilantro and onions, but we were asked by the server for our preference.

The pollo taco was chopped rather than shredded. This chicken itself had come straight from the smoker, which gave it a deep and rich smokiness. Our previous pollo tacos had been featured in some sort of hot sauce, but this taco was so rich in flavor on its own that no sauce was even needed. The chicken taco is also usually featured with cilantro and onions. El Tapatio had made the BEST chicken taco we had tried so far.

The asada and pastor tacos, also topped with the usual fix-ins, were smoked and finely chopped before being placed into the crispy corn tortillas. The asada was flavorful without being tough, and the pastor was just as tender. The only discrepancy we had with the spicy pork taco was that it was doused in a messy sauce, which we came to learn is common with that particular type of taco.

In terms of our standards, El Tapatio is one of the best. No matter the time of day, the parking lot is full of people trying to get their hands on some smoky delights. The $1.25 tacos were some of the best we had tried so far, even though they gave us the wrong toppings after asking. But overall we had an awesome visit! Just make sure you don’t park your car at the mechanic shop next door, because you will probably get boxed in (which we totally don’t know from experience). 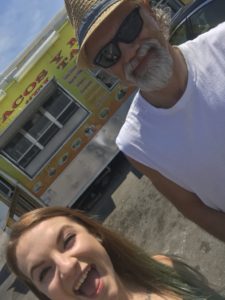