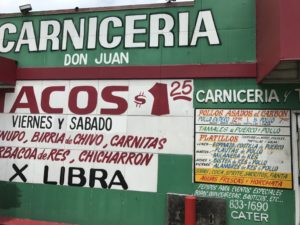 Our next taco truck adventure landed us at Don Juan Carniceria y Taqueria right by the intersection of Nolensville and Thompson.

First impressions: Don Juan isn’t exactly a taco truck. It’s a skinny little building with a drive thru, so we’re counting it as a wanna-be truck.

When we arrived at Don Juan we struggled with parking, which makes sense considering it’s mainly a drive thru. When we finally made our way up to the order window, we were greeted with a smile. She let us know that we could order at the window and then make our way to their seating area where a server would bring us our order. This was our first experience with an indoor seating area! We made our way into the little makeshift shack complete with tables, chairs, and a loud A/C unit. Outdoor seating was also available, but with no shade.

On this day, we were feeling particularly hungry and decided to add specialty item to our menu. 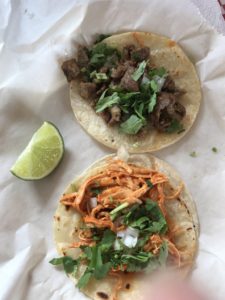 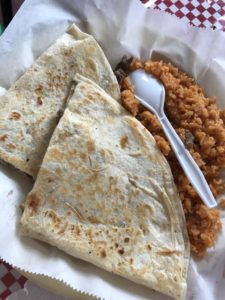 The pollo taco was shredded rather than chopped. It was tossed in a spicy sauce and topped with the usual cilantro and onion. Though the chicken itself had awesome flavor, it was little dry and made it hard to swallow without a swig of water. The asada taco, also topped with the usual fix-ins, was chopped, rather than the long strips we had previously received. It was juicy and tender. The tacos didn’t come with any sides except for a lime.

After we finished our tacos it was time to tackle the chicken quesadilla. The thing was MASSIVE. It came settled on top of a bed of rice, which ended up being a little too dry and bland for us to finish off. The quesadilla itself was warm and gooey, packed with cheese and chopped, seasoned chicken. The flavor was on point, but the chicken was, once again, a little tough. Needless to say by the time we left, we were ready for a nap.

In terms of our standards, there was a decent amount of people at Don Juan. It is definitely known to be one of the best by the locals. We enjoyed the fact that we could sit and have a server without being outside or in a car. They didn’t ask about any toppings, but the tortillas were nice and crispy! Overall, we had a really awesome (and filling) visit!