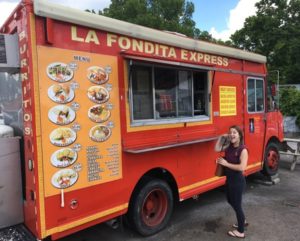 The second taco truck we visited was La Fondita Express. The bright red truck is located right by the 440 ramp at the end of Nolensville Pike.

Lets start out with first impressions. The truck itself is up on cinderblocks by the entrance of the highway with no shade anywhere in sight. We definitely think the best way to approach a lunch trip here would be to order at the truck, and eat in your car. Even though there was no outdoor seating and the location wasn’t ideal, we were surprised that it had so much foot traffic! There was definitely a little bit of a line when we showed up, which led us to believe we were in for the real deal. 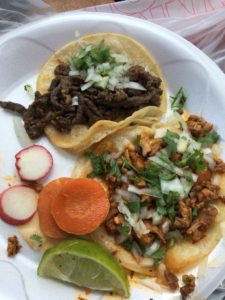 We have some set things we always look for on our taco adventures. We look for things like foot traffic, general atmosphere (if they have seating, shade, servers, music, etc.), toppings on tacos (Raelynn is super picky about cilantro, so she always records whether or not they ask her if she wants it), and if the corn shells are crispy or soggy. Fondita didn’t ask about toppings and didn’t have anywhere to sit and enjoy their tacos, but the tortillas were crispy and the tacos were rockin’.