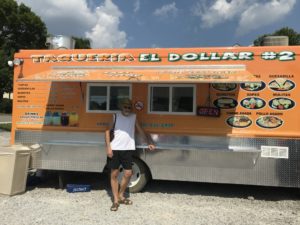 First impressions: Taqueria El Dollar #2 is located in a gas station parking lot, which didn’t have us as excited as we were with previous locations (we’ve been spoiled so far). There was no outdoor seating available, which was a bummer on such a hot day. If you plan on eating at Taqueria El Dollar #2, make sure you don’t mind some hot sauce on the floor mats.

The Tommy’s Tracks team was honestly a little skeptical about the quality of tacos from a gas station taco truck but HOLY MOLY WERE WE WRONG.

We approached the friendly man at the truck window and placed our order. Tacos were only $1.25, which was on par with the other trucks we had visited so far. There was not a single shady spot around the truck, so we were relieved when our lunch came out just a few minutes later. 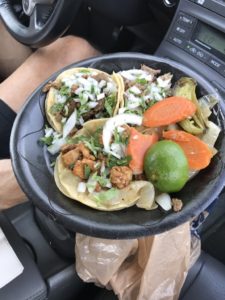 We definitely started our trip to Taqueria El Dollar #2 with a bit of hesitation, but we were completely turned around by the time we left. We started out with a chicken taco. The meat was chopped, rather than shredded, and was one of the most flavorful we had tried so far. The chicken was tossed in a spicy red sauce, but it honestly could’ve just been served alone. The meat was cooked and seasoned perfectly. The chicken was juicy and melted in your mouth. They did not ask about toppings, so we were given the usual chopped onions and cilantro. We were also given grilled onions which added a little bit of sweetness to the spicy taco!

Next up we had the spicy pork taco, which was just as tender at the chopped chicken. It was topped with both types of onions, cilantro, and the usual spicy sauce. The taco was a little messy, as we’ve dealt with before, but definitely worth getting your hands dirty. We also tried our first BBQ taco. Our only complaint with the BBQ taco was that the meat had a little bit of extra fattiness that could’ve been trimmed before serving. The plate itself was garnished with lime, carrots, grilled onions and a grilled jalapeno, which was one of the snazziest presentations so far!

Taqueria El Dollar #2 was definitely a delightful surprise! We were skeptical, but proved completely wrong by some of the best tacos we had tried on our journey thus far. Though there was no seating or shade anywhere, we were jazzed by the tacos and cannot wait to make another trip!